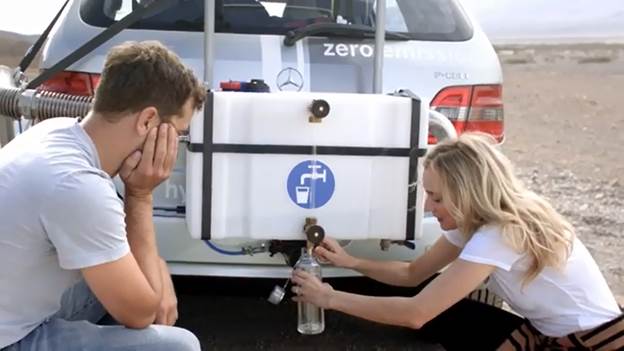 The people at Mercedes-Benz have taken their hydrogen powered B-Class car and put it through an interesting little test. They took the car to Death Valley with Hollywood actors Joshua Jackson and Diane Kruger with the intention of sending them off to explore the desert with no water other than that produced by the hydrogen fuel cell under the hood.

By attaching a water vapor cooling system and reservoir you can effectively collect most of the water produced from the fuel cell. The B-Class emits 9kg of water vapor for every 1kg of hydrogen consumed from its 3.7kg storage capacity. Its full range translates to about 400 km per full tank of compressed hydrogen fuel, which is more than enough to compete with the other no emission vehicles on the market.

These two actors were not chosen at random, both have been driving an F-Cell for the past two years in their day-to-day lives and apparently love it. However, this is still a very Hollywood production and should be viewed as such because they obviously had a film crew following them that likely brought their own water supply. Still, Mercedes-Benz/Daimler has said that no “extra Hollywood magic” was used in the filming of this experiment.

Regardless of the amount of truth to this publicity stunt, it does successfully show that you can safely drink the emissions from a hydrogen-powered vehicle, which is pretty neat. That being said, I barely trust peoples driving skills with today’s gas and electric cars, I couldn’t imagine those same people driving around with a tank of compressed hydrogen.