What’s The Difference Between A Ford Pinto And A Tesla Model S? According To NHTSA Not Much

In my view, the bureaucrats at NHTSA remind me of grounded ducks who create just enough quacking to irritate the people they’re supposed to serve. In the real-world, then, this view can also apply when it comes to today’s story of the Tesla Model S, and its tendency to catch fire when struck by a couple of stones on its undertray, or if you prefer a more historical view, the original ‘ball of fire’, more properly known as the Ford Pinto.

In the case of Tesla’s backstory; the political wonks in DC had been lock-stepping along in support of Elon Musk’s pretty, premium zipster since it rolled out of the design shop in San Carlos, in an attempt to create an ideal, poster-car view of what eco-friendly, 21st Century vehicles were supposed to be when they grew up. However, as soon as Tesla cars started catching fire for no apparent reason, even the dullest bureaucrats had to call for ‘action’ in order to help stem a flood of bad press, equal to the number of flamers parked alongside the Nation’s highway’s and byway’s.

So, in an attempt to ‘get to the bottom of the problem’, and in order to ‘protect the public,’ NHTSA quickly mounted an investigation into Tesla’s multiple conflagrations. However, three months passed with not much action to discuss until last Thursday. Then, in a clear attempt to gilt what had, by then, become a smoking turd for the EV maker and its Federal green-car proponents, the agency suddenly decided to close its investigation not with a bang, but a simpering whimper.

In what could only be defined as one of the stickiest of all soft-soaps, NHTSA opined that it, “believe(d) impacts with road debris are normal and foreseeable. (However), in this case, Tesla’s revision of vehicle ride height, and addition of increased underbody protection should reduce both the frequency of underbody strikes, and the resultant fire risk. A defect trend has not been identified. Accordingly, the investigation is closed” (all italics are mine).

So, let me get this straight, as someone who has been around cars, and the auto business since I could stand on the front seat to see over the dashboard of my Dad’s ‘54 Pontiac; NHTSA determined that there was no ‘defect trend’, yet further concluded that Tesla’s alleged ‘fix’ would protect against a non-defective, er, defect? Wow, talk about falling down the rabbit hole.

As confusing as that may be, we’ve seen this kind of safety two-step in the past, however, and it also involved the tendency of one or more passenger vehicles to catch fire while operating on public roadways. It may be remembered that, in an influential 1972 lawsuit entitled Grimshaw v. Ford Motor Co., the plaintiff’s legal team asserted that a design deficiency in the gas tank mount of the Ford Pinto tended to trigger fires when involved in rear-end collisions. 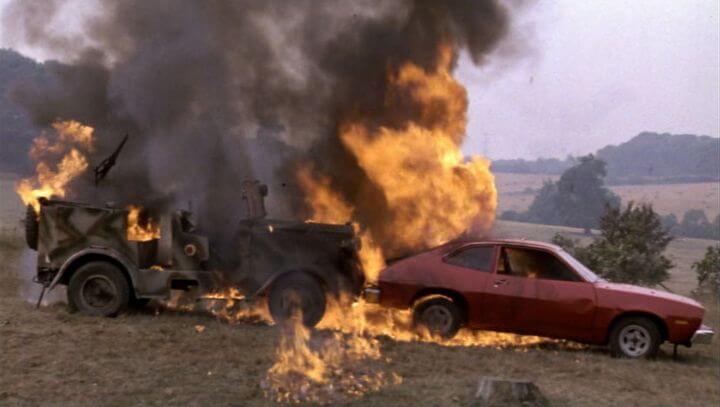 But, although significant private-citizen watchdog’s of the day, lead by Ralph Nader and supported by noted green publication Mother Jones, directed prodigious amounts of yellow journalism at the Ford brand, NHTSA, the guys who were Federally-charted to ‘keep the driving public safe,’ never called for a production recall, nor did any of its formal findings ever suggest that the design of the tank mount itself was faulty even though, by then, 27 people had been killed. Granted, the agency did, ultimately, announce a Pinto recall; but that was six years after the fact in 1978. And, as it happened, a national Pinto recall was already underway by Ford Motor Company itself driven by continually negative press reports, lagging market share, and at the behest of its own board of directors.

Consequently, the odd similarity between both findings may be worth some consideration since, in general, NHTSA always seems to leave the consumer with nothing more satisfying than a homily suggesting that, “the more things change, the more things stay the same.” So, if you’re running down the road in your Tesla Model S, and smell smoke after road clag strikes the underside of your $100,000 golf cart? Well, it could be time to get out and wait for the local fire brigade; ‘fix’ or ‘no fix’. Because based on track record alone, the agency’s ‘all-hat-no-cattle’ safety investigations tend to leave the public nothing useful to lean on other than hot air, singed feathers, or worse.