Tesla Model S: You Can’t Feature It Until You Fix It 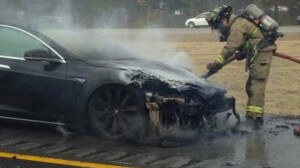 In the aftermath of coverage regarding the Tesla Model S and its tendency to catch fire, two essential facts have come to the fore. First, NHTSA’s historical safety decisions haven’t been made any better by the passage of time since they have, yet again, proved that politics trumps serious interest every time; and second, an auto marque is only as ‘good’ as the people who stand behind it; meaning the application of effective engineering, swiftly done, supported by oodles of ‘do-over’ money.

In the latter case, then, Elon Musk and his designers at Tesla Motors have done the right thing by quickly resolving any lingering concerns about the potential of debris ‘piking’ through the underside of the Model S. That said, though, it clearly wasn’t easy, and it sure as hell wasn’t cheap either.

According to a late March entry on Medium.com Musk asserted that, “it was important to bring (the) risk down to virtually zero to give Model S owners complete peace of mind.” Consequently, he challenged his engineering staff to produce four central enhancements to his flagship product. In the end, three of those elements related to new, bolt-on underside structures, and the fourth change related to software changes associated with the car’s overall ride-height management system.

In the case of the car’s physical protection, specifically, Tesla added a, “rounded, hollow aluminum bar (designed to) deflect objects, (and) absorb impact and force it to pike upwards well forward of the battery pack,” followed by the addition of a titanium plate engineered to avoid, “sensitive front underbody components from being damaged and aids in neutralizing the road debris.” On top of that, the folks in San Carlos added a third tier of physical protection by integrating a, “shallow angle, solid aluminum extrusion that further absorbs impact energy, (and) provides another layer of deflection (by causing) the Model S to ramp up and over (an) object.”

Below are examples of the Tesla Model S driving over dangerous objects:

That said, however, now that the Model S fire issue has been put to bed, recent concerns associated with the security of its internal telematic network have appeared which will undoubtedly lead to, yet, another round of Northern Californian soul searching. Regardless, however, the result of Tesla’s work on the fire concern alone will clearly bode well in the case of any new telematic weaknesses. Think of it this way: any company that can develop an effective retro-fit driven by a new set of protective components involving design and initial fab, followed by production and final integration all the while operating within a very time window, must be doing something right.

In the past, the old auto manufacturing opine suggested that, ‘If you can’t fix it, feature it”, or more properly you, ‘don’t actually fix a problem, so much as you talk it to death,’ tended to apply as easily as there were cars coming off the assembly line. However, when it comes to the team in San Carlos and its Model S, these guys are clearly serious about actually fixing any issue that may come up. Of course, maybe, just maybe, Tesla’s maverick CEO actually cares enough about the concerns of its customer base to put his money where his mouth is.

If so, now how weird will that be?