With an EV/HEV/PHEV market projecting a total share growth of up to 4% by end of the year, eco-sellers should be feeling pretty good. However, an innovative product, referred to as the Hyundai ix35 Tucson, is quietly rolling into dealerships in the west. Consequently, if reasonable sales numbers follow accordingly, the vehicle’s emergence could signal the beginning of entirely new ballgame.

Three central objections typically apply when working to attract buyers to the value EV’s. These include the potential of limited range, concerns about low time-to-charge cycles, and issues regarding the availability of public recharge systems that limit public interest. 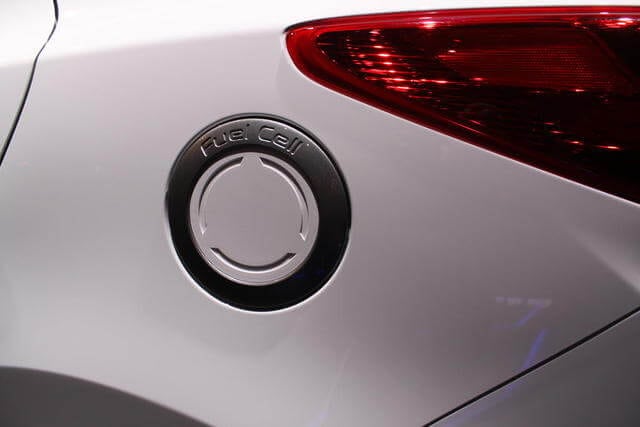 If one lives in a highly-urban area all three constraints are reasonably easy to overcome. In this case, most point-to-point locations will typically fall within the range of even the shortest legged EV, and if power recovery is required within a metro-area, more and more plug-in outlets are appearing where recharging can be accommodated. However, in less populous areas, range will be king, and power recharge points will be scarce, if at all.

However, what if there was a new car that was all-EV-all-the-time, and offered a consistent 300 mile range? Known in both Europe and the APAC regions as the ix35, the new Hyundai ix35 Tucson FCEV has begun to quietly appear at dealerships on the left coast. The vehicle offers typical Hyundai crossover size, trim and amenities, but it’s the vehicle’s collection of integrated power and storage components that sets the ix35 Tucson apart from its brethren.

Nestled between the vehicle’s rear wheels, a compressed hydrogen gas container stores enough H2 to produce a straight-up mileage of between 270 – 300 miles between fill-ups; and when you do need to add gas, the entire evolution takes about 10 minutes to complete.

This range advantage is accompanied by pretty acceptable performance numbers for a crossover, since the new Hyundai can go from 0-60 in just over 12 seconds, and tops out at a measured 100 mph. The car’s motivation is pushed by a 100kW induction motor, producing 134 HP at 5000, and 221 foot pounds of torque.

Currently, ix35s will be delivered on the basis of a 36 month/$499 per month lease plan. However, once the company gains a better understanding of the U.S. FCEV market, Hyundai has suggested that a future sale price will likely to be in the area of $28k (US).

Excitement aside, however, just like any other new endeavor, challenges will abound particularly in the case of delivering enough compressed Hydrogen to support likely interest in the effort. As it stands, public Hydrogen stations operate only in California and South Carolina, although more H2 utilities are planned for, or currently in construction.

Regardless, the Tucson represents Hyundai’s clear commitment to running a long game. According to a spokesman, the company is going to build interest slowly and only build 1000 units during the first model year, “Hyundai started developing hydrogen fuel-cell vehicle technology in 1998, and this latest (activity) will help further raise awareness of hydrogen power as a long-term transport solution.”

Eco-conscious drivers and scientists are looking for cleaner ways to power their cars. Here are some of the most promising alternative energy sources for the automotive industry
Read more

Volvo and ABB are set to introduce eco-friendly electric buses in the streets of Gothenburg, Partille, and Molndal in 2020.
Read more

How do we tackle climate change and global warming? One way could be adopting newer technologies especially in one major area: Transportation. Here's a look at some of the best electric battery technologies.
Read more

Towards the end of last year, Faraday Future was said to have secured some fresh source of funding. The electric car start-up has now confirmed receipt of $2 billion to aid in the construction of its first EV by the end of the year.
Read more

The market has not been that welcoming when it comes to battery-based electric cars with only three models having sold more than 10,000 units...
Read more
Electric Cars

Although never formally announced by Apple, rumours have been swirling for years that it would be developing its own car, presumably self-driving and electric....
Read more
Electric Cars

Financial incentives are being used by many countries around the globe that want to encourage the use of electric vehicles and reduce carbon emissions...
Read more
Electric Cars

Volvo is one of the global automakers determined to bring electric cars into the mainstream. Over the past few years, the Swedish automaker has...
Read more
Electric Cars

ABOUT US
Up-to-date news on electric cars, self-driving vehicles, and innovative transportation technologies.
FOLLOW US
0shares