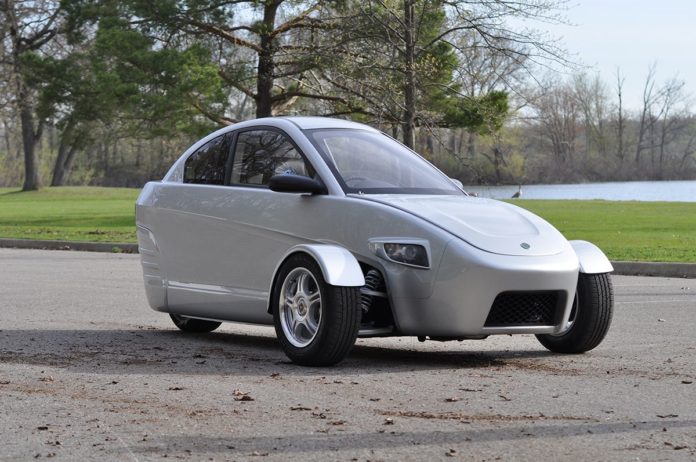 Although many consider the center of the sustainable vehicle universe to be based on EVs, PHEVs, or parallel-drive hybrids, there are a number of other options for those of us who appreciate efficiency regardless of its fuel source. This is particularly true of the new Elio Motors three-wheeled vehicle, since it mixes long-range and low cost, with common sense driving amenities in order to produce something entirely new for the U.S. auto market.

In 2008 enterprising designer Paul Elio decided to see if he could create a new vehicle for the commuter market, where the cost of getting from home to work and back was becoming a significant financial burden. At same time, he wanted to re-energize the auto segment by building his new vehicle on the basis of an All-American supply chain that, in turn, would lead to more All-American jobs.

Consequently, he came up with an innovative tandem-seat ‘cartocycle’ made of equal parts auto and motorcycle, built on the premise of high-tech components while, at the same, cost accounting its way down to a low, low, low, low MSRP. The result is the highly-sustainable Elio commuter car, and I have to say the product appears to be very interesting indeed.

The launch MSRP for the new vehicle is $6,800 plus tax. Yes I wrote that correctly, so just for fun, let’s do it again to make sure; that’s $6,800 plus tax. Now, just on the basis of cost alone, the vehicle has to be a winner, but there’s much more under the skin than just a low price point.

The Elio has been test measured to produce between 80 and 84 MPG on unleaded regular gasoline, and with its integrated 8 gallon fuel tank, the vehicle is able to deliver 640 miles to the tank; which is just exactly what the designer wanted in the first place. The vehicle’s powertrain is driven by a German IAV three-cylinder 0.9 Liter engine, producing 55 HP.

The little powerplant creates enough grunt to go from a standing start to 60 MPH in just over 9 seconds and tops out at over 100 MPH; which ain’t bad considering the fact that the vehicle also pushing a enclosed 1250 lb structure along. In addition to the Elio’s performance and efficiency measurements, the little three-wheeler hosts a complete standard amenities package including; AM/FM Stereo, optimized climate control, steering-wheel control sets, power window/door-locks, leather seating, a fold-down rear seat, and options for either manual or automatic transmissions.

All in all, the new Elio is likely to cause quite a splash when the vehicle rolls out of its new manufacturing plant in Shrevepoint LA during the 2015 model year, and along with the tech buzz, the company is also creating 1,500 new jobs. You can buy a production order-position for as low as $100, although you’re going to have to wait regardless, since Elio has already banked better than 20,000 orders already.