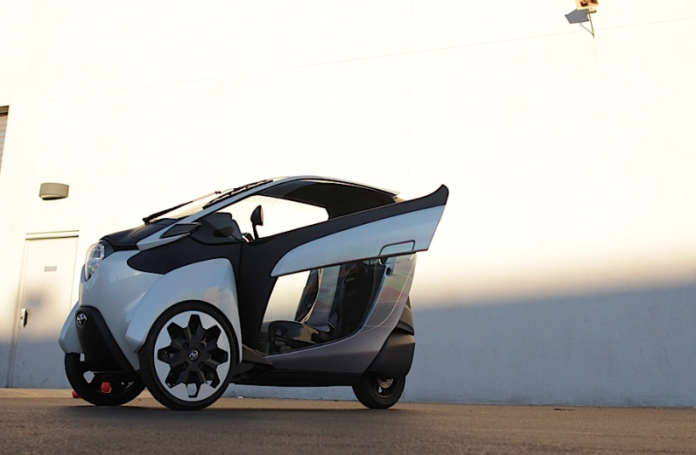 I have to say, there’s a lot of talk about three-wheeled vehicles these days. With the Elio making news on a nearly daily basis, on top of Campagna’s T-REX, and now, with Polaris’ new Slingshot vehicle nearly ready to hit a highway near you, the design decision to reduce a vehicle’s wheel-count by one seems to be quite the attractive consideration.

While all of these sustainables are currently either designed, or built, in North America, the Japanese haven’t been lax when it comes to three-wheeling either. Honda launched the sale of its three-wheeled Gyro city car in 2011, mounting a 50cc ICE that delivers 100 MPG. However, the vehicle was immediately enhanced on paper when the company released a design concept that was clearly oriented to highway ‘driding’, rather than the current production vehicle’s more urban ‘people-mover’, focus.

Now, Toyota is about to join the fray. After several years worth of development, and a successful Japanese test program, Honda’s arch enemy is about to deliver a test fleet of its i-ROAD three-wheeled electric vehicles to Grenoble France, in order to see how the vehicle stacks up against the requirements of daily ‘drinding’ along mountainous country roads.

The Toyota program is currently slated for an October launch, in conjunction with Citelib’s car-sharing project, based on supporting and enhancing the city’s overall transit infrastructure. According to information provided by program’s managers the i-ROAD fleet will be equipped with IT access to Citelib’s information and mapping system via app or other mobile device. This direct access will, in turn, allow users to leverage real-time road directions and other travel information, along with reservation and rental-purchase of one of the vehicles prior to arriving at a public pickup or drop-off point.

Toyota is providing 70 i-ROADS that will be operated on a daily basis extending throughout a three year program cycle. France’s EDF electrical utility will supply up to 30 public electric car charging stations in order to complete the overall program’s business-value loop.