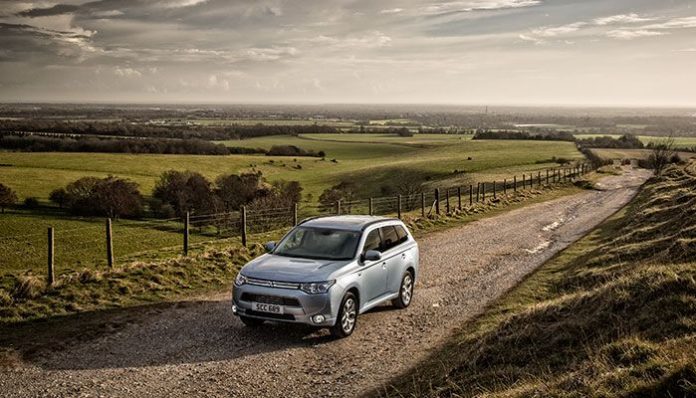 There an old marketing axiom that opines “if you can’t fix it feature it,” and in the case of Mitsubishi’s nearly ready-to-launch Outlander ‘4 Work’ PHEV, less is clearly being touted as more in the commercial vehicle segment.

Right off the bat, there’s a problem with Mitsu’s new ‘van’, since the new commercial vehicle is really nothing more than a standard Outlander SUV chassis and body, with the rear seats removed and replaced with cargo-grade rubber matting covering the floor area between the driver/passenger seats and the rear hatch; along with a rear-quarter window application that blacks the windows out.

Granted, Ford UK is doing solid business in the EU with its smallish commercial ICE-based Transit Courier and Connection products, and both do look more like SUV’s than vans; but in truth, those vehicles are designed specifically to support small-scale package delivery in the commercial segment, and not tailored to support Soccer Moms on holiday. So, what’s the ‘new’ van all about?

Perhaps it has something to do with the fact that the SUV brand has, and continues to produce impressive EU sales totals with its now two-year old PHEV variant and they want to simply dip a toe in the commercial market to see if something starts shaking. Or, it could be that that the company is simply trying to deliver something new to the market while its eK mini car concept evolves toward a full-fledged consumer product; I don’t know, but either way, its pretty weird if you ask me.

Nevertheless, EU customers are going to have a chance to experience the new Outlander ‘Van’ at the beginning of October at a price that few can afford, since the vehicle is set to roll out at EU39.9, or $61k U.S. Nevertheless, the Outlander ‘4 Work’ is coming one way or the other so hang on commercial operators, it should be an interesting experience.