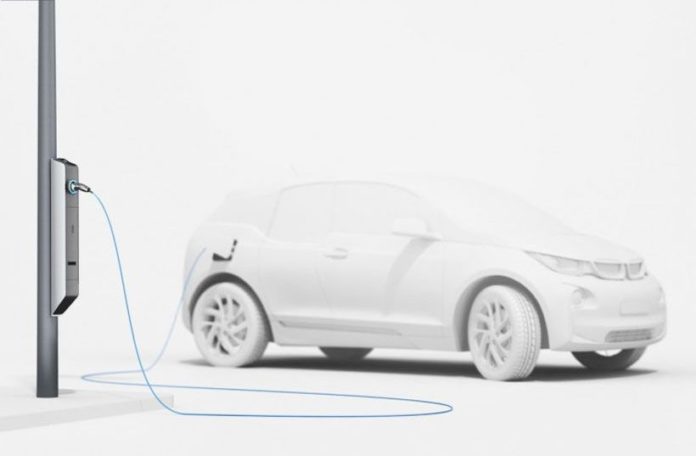 The biggest problems that the electric car movement is facing are (as always) both financial and technological. Firstly, the cars themselves need to drop significantly in price before they are even considered to be viable for the everyday consumer. The battery packs also need to see a substantial reduction in price. Though, this is also mainly technical, too, as the resources are not yet there to produce long-lasting and financially viable battery packs to rent or buy. Another problem is the lack of charging stations.

It seems that rather than looking into groundbreaking, revolutionary new innovations to supply necessary charge to our electric and hybrid cars, a simple and sustainable solution has been hanging above our heads for quite some time. BMW is the first among what will surely be many major car makers who are starting to make use of streetlights for electric car charging..

Streetlights have long been a part of our everyday lives, a simple piece of ingenuity that has safeguarded our streets and helped drivers find their way on the darkest and foggiest of nights. The first record of street lighting was back in the 4th century in Antioch, Turkey and the logic behind street lighting is still the same today.

Street lighting also carries a safety aspect. Car owners leave their cars under streetlights because it significantly cuts the chance of their car either being vandalized or broken into.

So, what if we could leave our car somewhere that’s both safe, and with the piece of mind that we’d be coming back to a fully charged car the next morning.

BMW has already produced two of the “Light and Charge” streetlight stations which have been placed outside their headquarters in Munich, where they will run as a pilot program to ensure the concept works before they ultimately expand the program, providing everything goes well. Reuters reports that Munich should see the “Light and Charge” pop up hopefully as soon as next year.

The street-lights themselves will use hardware from BMW’s ChargeNow power stations, with efficient LED lights which BMW has said they will be happy to share with not just BMW owners, but others as well. BMW has also said that the system will be able to implemented into already existing streetlights, meaning urban areas especially could quickly and easily see the system come into place once approved.

Though, as is the case in this industry, the idea is still a concept and it will still be a while until we see any sign of worldwide streetlight charging stations.

As for the cost, it’s not going to be free. Nothing has been released as yet to do with public charging costs, however it is expected that the payment process will be through a smartphone application.

Wind and Solar to Power Vehicles

[sam_ad id=”3″ codes=”true”]While on the theme of easier, greener charging; it seems that Ford has also made a significant step into keeping up their green efforts.

Ford announced a partnership worth $750,000 with Wind Energy Corporation, and is set to begin early next year, completing in the Springtime.

As well as the clean cut statistics, the program will also produce 20,000 kilowatt-hours of electricity annually – enough to supply two average homes with electricity for a year. The primary focus however, is to power their buildings, electric vehicle charging stations and lot lighting.

The newly installed equipment will wear the traditional blue oval logo and effectively acts as a great reputation boost for Ford, whose green efforts up until now haven’t always been on par with their competitors.

This said, Ford, under its new CEO, is effectively looking into viable renewable ways in which to power its products, and that’s not bad news for anyone.