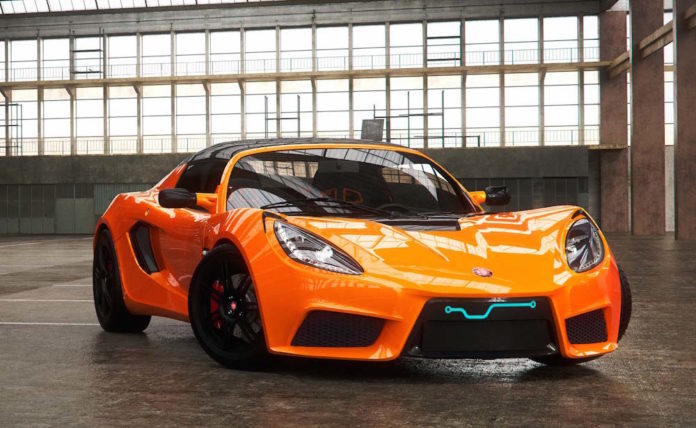 The much anticipated revival of Detroit Electric has been… stumped, to say the least, for quite some time now. After its revival back in 2008, its debut SP:01 has been a stop-start process, ongoing for a little bit too long now. Despite the shaky start to life, DE has now released the specs and revealed a few new visual differentiations from what was last shown to us back in 2008.

Starting with the specs, DE proudly announced that the SP:01 will be the world’s fastest pure-electric two-seater sports car. Power stands at 285 HP / 210 kW electric motor, with a top speed of 155 mph. Alongside this is a 0-60 speed of 3.7 seconds. These stats are sure to impress and exceed the expectations we had back in June when the announcement was teased.

Sadly though, despite being able to race past its rival the Tesla Roadster (top speed of 125 mph) the battery will be dead at what can only be described as a ‘mere’ 180 miles, 65 below the current Roadster, and that’s before the upcoming 400 mile Roadster upgrade is implemented too. What’s disappointing about the range isn’t just that as the consumers, our biggest need is reliable long-range electric transport, but that back in 1911, the Detroit Electric built by the Anderson Carriage Company could do 80 miles, and on one test even reported 211 miles before coming to a halt. Yes, the top speed was only 20 mph, but you’d like to think that after over 100 years, DE’s engineering skills had come a little more than just a few fancy cockpit features and a new spoiler.

A possible controversial talking point will be the inclusion of the manual gearbox. Almost unheard of nowadays in the sports EV world. Possibly a throwback to the old times of Detroit Electric? Though single and two-speed automatic transitions will also be available. There will also be a sculptural rear wing and under-body diffuser to reduce lift and improve handling at higher speeds.

The Roadster does match the SP:01 for 0-60 time, but the SP:01 is actually 100 lbs lighter at 2,590 lbs, despite the same aluminium Lotus Elise chassis. In addition to this, the SP:01 comes in a little more streamlined too, which adds precious miles to the top speed with aerodynamics. On the top, we now see a fastback roofline instead of flying buttresses that were first pictured in the previous prototypes.

The SP:01 does win the awards for the most tech-minded EV. Inside the cockpit is an 8.4 inch tablet that controls elements within the cockpit itself such as: temperature, lighting, music and the SAMI system as mentioned in the October article.

The SP:01, like other EVs, will also feature the ability to charge other electric appliances, or even your home if need be.

The buyer will have a wide selection of choice when it comes to personal preference over colors and inside features. Ccoloured leather seats in red, beige, tan and black, or two-tone leather seats — black with a choice of red, beige, blue, orange or grey, and optional leather trim for door panels, door sills and dashboard. There is even a choice of 3 different wheel choices, as well as carbon fiber trims to those who feel the need to make the car even lighter and faster.

To those who are eagerly waiting for the SP:01 to hit the market, the wait will continue, possibly for over a year. With no dates yet set, it seems despite this announcement, the finished product isn’t quite there yet. You have to wonder whether when it does actually go on sale, whether the tech and specs that is has will be outdated. This is a car that’s been in production for 7 years.

When the SP:01 hits the markets, it will wear the expected price tag of $135,000. Still a very long way from the average consumer’s price range and still more than a Tesla Roadster which, with the soon coming upgrades, seems a more viable option.

DE needs to get its act together and get the car into production ASAP. Competition is only going to increase and standards will rise in the process. If DE isn’t careful, it could see itself releasing a car far behind its time. With so much time invested in the car, there is no more room for mistakes or set backs.