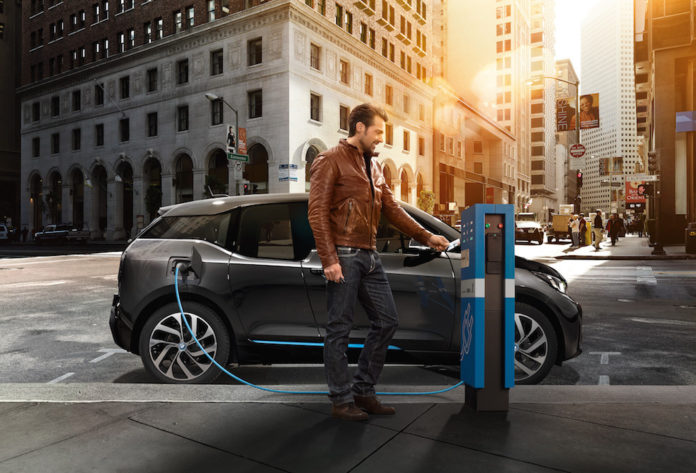 Announced this week at the Washington Auto Show is the upcoming team-up of two giant German automakers – BMW and VW – along with another key player, ChargePoint, the biggest charging network for electric vehicles, who are joining forces to fund to build around 100 charging stations for electric cars using the Combined Charging Standards (CCS) protocol. With already over 20,000 existing charging spots in North America, ChargePoint will use its database to identify both gaps and popular charging sites to suggest locations.

Those stations will be positioned particularly in the most heavily-traveled routes along the East and West Coasts. Each charging station will be set no more than 50 miles apart in areas with nearby restaurants, shopping centers, rest stops and other places where people will have something to keep them busy about while waiting for their batteries to get filled up.

Each site will rise 50-kilowatt DC fast chargers or 24-kW DC Combo fast chargers with the SAE Combo connector, as well as 240-volt Level 2 AC charging stations that can be used by all electric cars. A BMW i3 or VW e-Golf can recharge up to 80% at a 50-kW CCS station in about 20 minutes, or 30 minutes from a 24-kW station. The very first station is already being constructed in San Diego which will connect to Los Angeles, San Francisco and Portland. Another one will run from Boston to Washington, D.C. along Interstate 95. The remaining other stations are expected to be installed until end of this year, making road trips possible even in cars with ranges under 100 miles; the new network of stations could also be useful when driving shorter distances and around-town driving.

In a statement of Robert Healey, Head of EV Infrastructure at BMW of North America, “This project is another important step in the development of the U.S. e-mobility infrastructure that makes longer distance travels a real option for consumers.”

With the additional infrastructure for charging networks being furthered by BMW, VW and ChargePoint, automakers can confidently produce more electric cars, while also supporting the Obama Administration’s stricter fuel-efficiency requirements for vehicles in the coming years.

With the completion of the project by the end of this year, the North American market will likely reach 1 million electric cars in a few years, creating a greener community for the next generation.